I hear the word tourism and think awful things: foreign places packaged in plastic for those incapable of digesting true culture. I think of long lines to expensive landmarks crowded with people frantically scrambling to get a selfie before rushing on to the next thing. And surrounding those landmarks, you are bombarded by massively produced trinkets shoved in your face as manipulative prices are shouted at you. Our professor, Dr. Mike Vercelli thinks of resorts simply picked up from home and placed in a different climate. Ted Howe, our TEP representative, thinks differently. Tourism is entertainment and excitement. It brings energy and money to locals, and he does all he can to let people experience the true Belize (at least for the people who actually want it). Our group is here for the real culture, and it can be hard to find that unfiltered perspective. TEP does a fantastic job to deliver this, but you still get what you put into it. Culture won’t be handed to you on a silver platter.

Ever since studying the Maya in 2nd grade, I always had a fascination with their ancient civilizations. When I heard TEP had fit Maya ruins into our otherwise music based itinerary, a childhood dream came to life. I would walk on the same grounds walked by people far too advanced for their time.

Around the bustling twin city of San Ignacio, there are several Maya sites. We were able to experience three in the short time our group took a break from studying Belize music culture. First, we visited Xunantunich. This civilization does not have quite as much significance as some of the other Maya sites, but it is nonetheless impressive containing the temple, El Castillo, which is the second tallest structure in Belize.

Our guide, Ramon Rodriguez, walked us through the jungle to the site identifying the iguanas roaming about and plants like cecropia, gumbo-limbo, and copal. Later, he would show us how to fish a tarantula out of its hole and point out a lone toucan’s call. Others in the group were actually able to catch a glimpse of the toucan, but I missed the opportunity. Up the stairs we climbed until you could see the peaks of the grey decrepit stone structures towering above huge grassy square plazas. Ramon told us the site was at least as old as 800 AD and explained what life would have been like for the 200,000 people who once called it home. It could have been the lack of shade breaking my focus, but even standing right there in the center of it all, I couldn’t seem to wrap my head around it.

If I’m being completely honest with myself, I don’t remember feeling any particular way about the ruins. What I remember is taking photos—and not the kind a professional photographer would die for but social snapshots. There are plenty of photos of the site out there I would not be able to top, so capturing the audience seemed more appropriate. I came to experience the dead city and feel the weight of time, but instead I found myself more interested in the life that was there that day: my friends (some laughing enjoying an experience to share, some afraid of the deathly heights), the guides who made a living from this place, the staff who were given a wage running the ferry, the armed guards patrolling the Guatemalan border, and of course the wildlife who to this day call these ruins home. The next visit was to Actun Tunichil Muknal (ATM), an optional tour half of our group decided we couldn’t miss. This cave was sacred to the Maya, and archaeologists discovered a gold mine of preserved artifacts proving it was used for years of ceremonies. Though there is no true way to know what the Maya thought, Dean of Faculty of Arts and Sciences at Galen University Sherry Gibbs assured us, “Walking into the unknown with nothing but the light of the torch, I know they really thought they were in the underworld in those caves.”

Our guide, Luis Zaiden picked us up from the hotel transporting us and several others a long way through unpaved roads to the Tapir Mountain Nature Reserve where the cave is located. We hiked through the jungle, wading through rivers to finally arrive at the opening of this spiritual cavern. With our helmets and headlamps on snug, we dove into the sparkling blue pool at the mouth of the cave, warily swimming to the first rock. Cautiously splashing through the dark underworld in single file, we gave instructions to the spelunker behind, “Watch out for this rock.” “Don’t touch that wall there.” “Duck down and squeeze through here.” As we got deeper, we would stop to admire the beautiful shimmering calcified off-white walls, stalagmites, stalactites, and the fascinating effects of water flowing through rock for centuries.

Finally, we reached a large chasm where we removed our shoes and climbed up to the ceremonial chambers. Most of the rock at our feet felt as if it had been sanded down to perfection. We passed by other tour groups who were still in awe of what we were about to see. We knew what was in this cave: thousands of ceramic artifacts, stoneware, and skeletal remains. But maybe we didn’t believe it. I couldn’t comprehend why they would let any average Joe walk barefoot past fossilized bones and ancient pots still in their place of discovery—nothing between us but a bit of red tape. Luis laughed as he told us how we even came to be allowed in this place, “This is real Indiana Jones stuff right here. You won’t get it anywhere else.”

Luis pointed out artifact after artifact explaining the Maya would prepare for years to come to these caverns. They had to present offerings for the gods to permit them entrance, and eventually they would practice rituals of prayer, dance, blood-letting, sacrifice, and even torture—all to appease the gods and bring prosperity to their resources. I was stunned, but what was even more breathtaking was exiting back to the over world. Swimming into the sunlight dripping through the cave door cracks, I never saw greens and blues so bright and vivid. 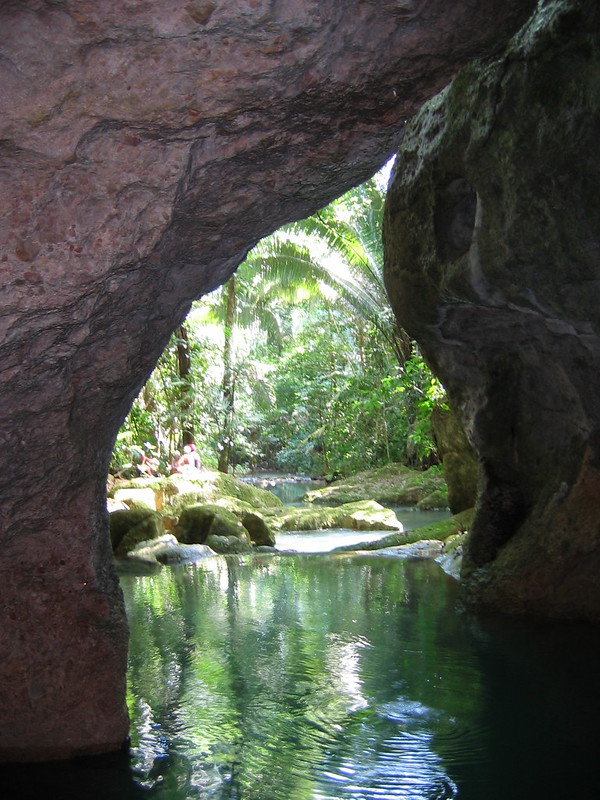 All of us were certainly tired and overstimulated, but my friend Cole and I couldn’t leave San Ignacio without seeing one more site. After all, who knows when we’d get another chance. On top of a hill overlooking San Ignacio, Cahal Pech is one of the oldest Maya ruins, dating back as far as 1200 BCE. Luis was kind enough to drop us off there and we paid an easy $10 BZD to enter. With its tallest structure reaching a mere 25m, few would say this place was as impressive as the mysterious ATM caves or even the towering structures of Xunantunich, but Cole and I would say otherwise.

We had it all to ourselves. Other than a couple humans passing through and the occasional truck backing up in the city below, there was nothing to come between us and experiencing this civilization for what it was and what it is now. And this dead city was not dead at all. Trees rooted themselves in broken walls surrounding wooded plazas peppered with flowers. All that shade gave us even more space to reflect. Instead of guides telling us what to look at and think about, all we could hear were bugs, birds, and the cool wind telling stories of the abandoned town. Our imagination was free to run wild as we sauntered through simple mazes of tight tunnels and asymmetrical stairways.

I took pictures with my phone only to ensure I remembered how I felt that evening. Cole climbed one of the staircases and sat cross-legged in a prime spot while I continued to explore on my own. If the earth or the gods or the magical stuff floating in the air really can speak to us humans, this is where they are heard. I could picture Maya walking about, markets in the plaza, rooms for storage, an altar where someone must have once given a big speech, a well that once flourished; an ancient community living like I was today but so long ago, my head would have been hurting if the overgrown ruins weren’t so beautiful. I walked back to Cole and agreed we had both absorbed enough spiritual energy. As we left, we heard the toucan call, and though we didn’t get a close up, we watched it fly over our heads toward the ruins when we got too close. Right at the exit, we heard some sort of cricket-like creatures piercing us with deathly tones. We could have stayed forever but knew we had to leave. Walking down the hill, we talked about what we felt there. Even if it was all in our minds, we were moved. Selfies and guides are all great, but with just a little self-guidance, we find the moments that give us reason to travel.